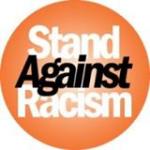 The YWCA’s Stand Against Racism, which happens annually in April, is a partnership of YWCA Associations throughout the country with the goal of bringing people together from all walks of life to raise

awareness that racism still exists and that it can no longer be ignored or tolerated. Our strength is in numbers!

Any group of any size can become a Participating Site of the Stand Against Racism: corporations large or small, schools (from elementary schools to universities), government agencies, non-profit or civic organizations, hospitals, churches or synagogues, even two neighbors gathered around a kitchen table. As a Participating Site of the Stand Against Racism, you can host a “Stand” at your location. It could be either private or public. Or you can attend another group's event. There is no cost to participate. When you sign up, you will be provided with posters and buttons or stickers that say "Racism Hurts Everyone."

In 2013, we had approximately 5,000 people who attended Stand Against Racism events in Buncombe County!

Sign up to become a participating site for the 2014 Stand Against Racism.

Learn more and share your ideas at our Pre-Stand Against Racism Open House on March 19.
There are two time options - 12 pm and 6 pm. We hope to see you there!

Ideas for the Stand Against Racism
Participating can be as simple as posting the poster or wearing the "racism hurts everyone" buttons that you will be provided.
Or you can host an event - events can last fifteen minutes or as long a you want, and they can be public or private.

We have created a Racial Justice Resources page with links to articles and videos.

We seek to bring people together for one common goal – the elimination of racism. Please join us.